Nemetschek House Becomes a 3D Model in One Day

A real case in the Nemetschek Headquarters shows the benefits of Reconstruct technology for the AEC/O industry – and for the Nemetschek Group itself.

Reconstruct is a SaaS platform that utilizes images and videos from 360 cameras, drones, and cell phones to produce 3D reality models and automatically aligns these models over a project’s timeline. 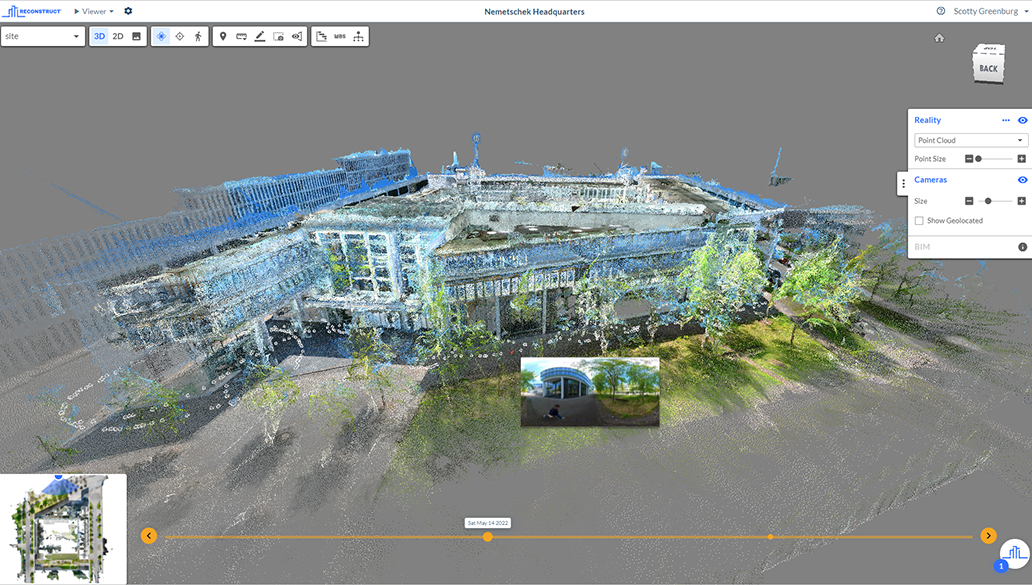 To the topic page
A real case in the Nemetschek Headquarters shows the benefits of Reconstruct technology for the AEC/O industry – and for the Nemetschek Group itself.

The Nemetschek House in Munich is a four-story office building hosting the headquarters of the Nemetschek Group, as well as several of its brands, among some other companies. The building, located in the eastern part of Munich, was constructed in the year 2000, fittingly at Konrad-Zuse-Platz. Zuse was a German civil engineer, who developed the world’s first programmable computer. Many photos from the Nemetschek House over the course of the decades exist and even a drone recording show the impressive building from above. But until now there was no digital model of the structure - created in just one day, using a camera, a laser scanner and Reconstruct software.

Driving Innovation by Investing in Start-ups

Why Reconstruct? The Nemetschek Group aims to drive efficiency and sustainability in the construction industry to empower its customers to shape the world – through the intelligent software solutions of its 13 brands, but also by investing in early-stage, innovative start-ups that complement the current portfolio. One of them is Reconstruct, a US-based provider of remote construction quality control and progress monitoring. Such investment from companies like the Nemetschek Group is helping entrepreneurs like Reconstruct to accelerate growth and execute go-to-market advantages by connecting them to the open partner ecosystems. In return, these startups enrich the industry with new ideas and approaches. This leads to a more efficient construction process, higher quality of buildings and more sustainability. The Nemetschek Group’s investment into companies such as Imerso, Reconstruct, Sablono and SymTerra is a perfect fit to the group strategy of supporting newer companies that are shaping the future AEC/O market and driving innovation.

So, how exactly is the AEC/O industry benefiting from Reconstruct? We wanted to find out ourselves and test the solution directly in and on the Nemetschek House. No sooner said than done, Steve Smith, Product Portfolio Director in the Build & Construction Division of the Nemetschek Group, set out with a Leica Geosystems BLK2GO mobile mapping laser scanner in hand to take an afternoon stroll around and throughout the building. In less than two hours, Steve was able to make his way through the entire interior, exterior, and around the block surrounding the 20,000 m² building. He used Leica Geosystems’ Register 360 software to process the data and published out a point cloud file. He then simply pressed “upload” into the Reconstruct App, which was connected to his camera. It only took three more hours in Reconstruct, to create a fully navigable, measurable point cloud, 3D reality model, and 2D orthographic model of the Nemetschek Headquarters. We extend a special thanks to the team at Leica for allowing us to use the BLK2GO for this project.

For comparison, Steve also walked the same path with a less expensive 360 camera connected to his smart phone. The resulting point cloud was also placed into Reconstruct, on the same project timeline to compare the point cloud densities and measurability. 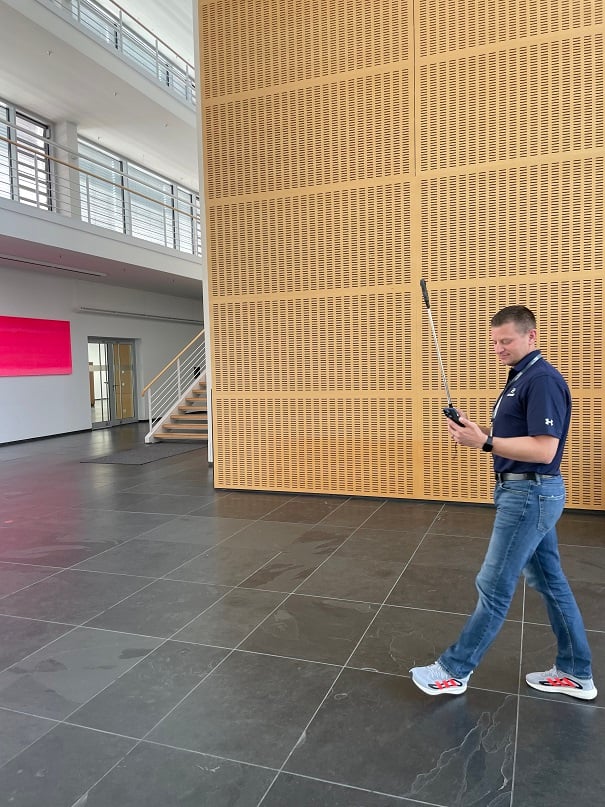 Scanning the Inside of Nemetschek House

Scanning Process with the Leica Scanner 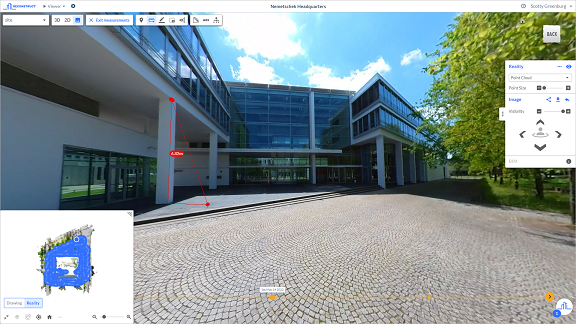 Nemetschek House Scan from the outside

The project highlights a few aspects of the Reconstruct technology that can be game-changing for clients: With reality capture data from flat photography/videography, 360 image and video, and drone images, Reconstruct can quickly produce point clouds. In addition, it delivers 360 images of the entire site, as well as 2D orthographic of floors and ceilings. And the tool automatically aligns all captures over time and measures objects in both point cloud viewer and reality viewer. This enables users to quickly produce high quality digital versions of their already existing buildings, or - if used in the construction or re-modeling phases - helps them to compare the as-planned with the as-build status, putting them in the position to find differences before they turn into expensive issues.

In addition to the benefits for key stakeholders like owners, facility managers or general contractors responsible for construction and re-modeling projects, the project also underlines how important it is, to support visionary ideas. For Nemetschek but also for the entire AEC/O industry. Groundbreaking innovations like this enable new workflows – with the potential to disrupt the entire lifecycle of buildings. 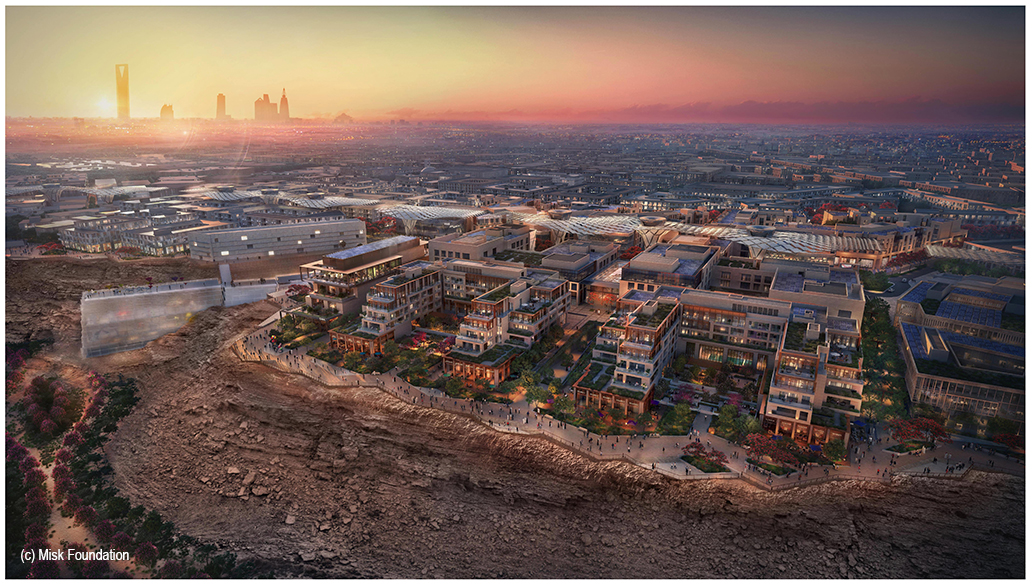 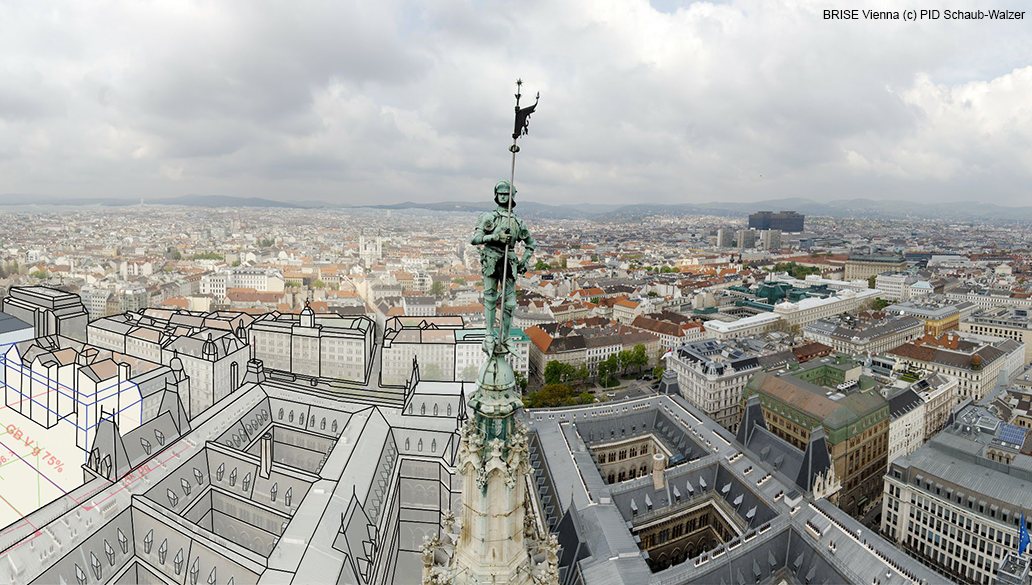 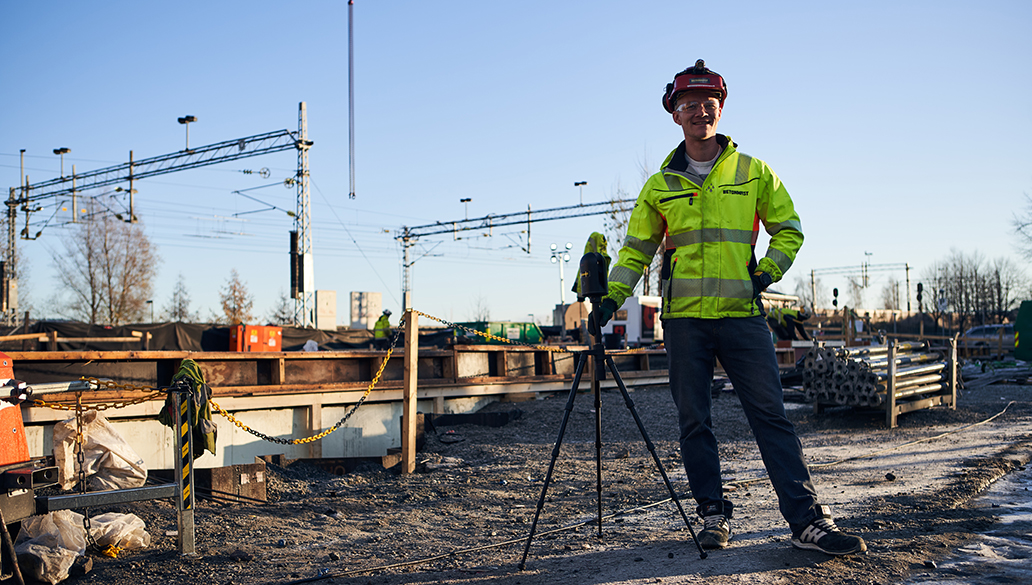 The construction industry is resource intense. The combination of industry expertise and innovative startups aim to change that. Here are two examples.